Sound has no legs

Sonic interventions between an ambient and a subversion

Soundart interventions into the public space can take form of a collective music event, acoustic sculptures or landscapes or an exactly aimed attack – for example through the subbass frequencies that cause building walls and their inhabitants to tremble. Predecessor of such experiments include Brian Eno’s ambient as well as works for canteens by Erik Satie. 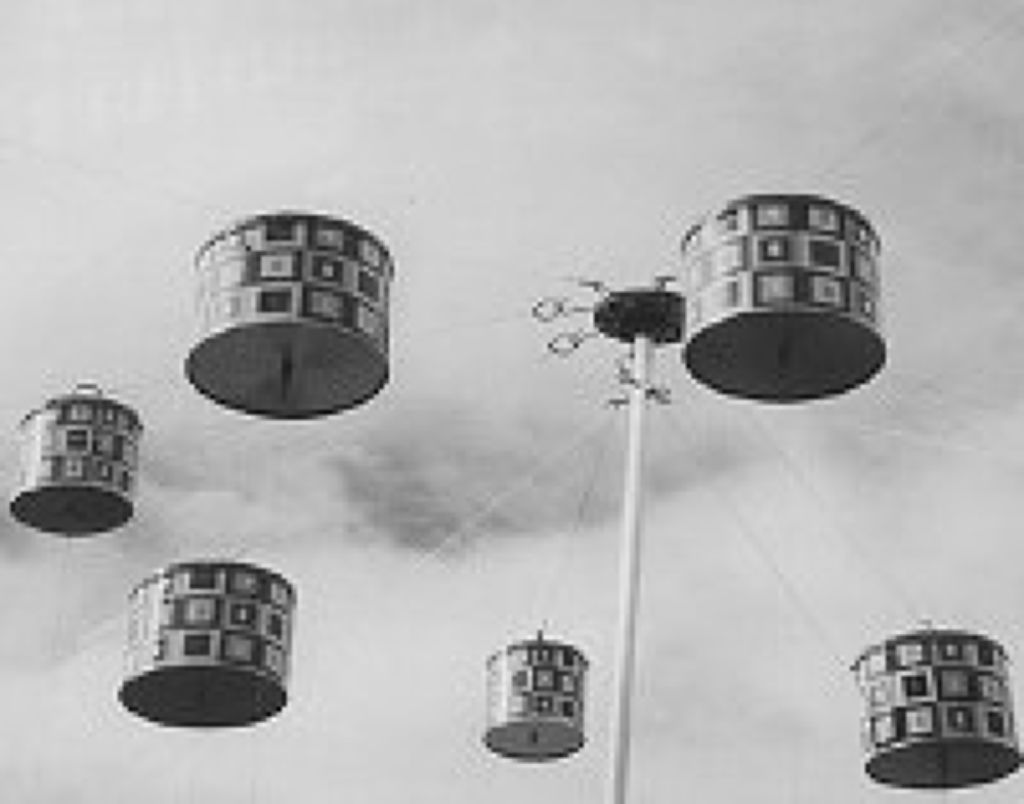 The contemporary practice of sonic interventions, or an artistic interventions into the public space is so complex and all-encompassing that it can be useful to narrow it down and get to its core. The term „interventions“ evokes a sense of activity, something bordering on propagation and intrusion. But sonic intervention can be unobtrusive, immersive. That is what the sound is from its very definition anyway – like Proteus, impossible to seize, and fleeting like the nymph Echo who Narcius searched for in vain in the woods. John Cage used to say that „sound has no legs to stand on.“ This sounds rather poetic, cryptic, and zen-like. But Cage points to a relevant part of the sound space and hearing and indirectly also to the changes in music within the last century. Sound is a physical phenomenon, not a physical object. Its real but ephemeral, it roves in space. It is tangible and invisible until spreading sound waves starts to vibrate, enliven, and move an object or medium. Since we live in an age obsessed with matter, we often confuse sound with sounding object and music with its authors persona – we focus on a celebrity, medium, tech systems that only manifest sound, record, reproduce and distribute it. Since sound art is relatively young and until recently a marginalized field, its history shows many attempts to protest against authorities and tendencies to resist. How to deconstruct emptied forms of a cultural operation? How to define against the concepts that understand an artefact as an autonomous object independent of the physical or social space; its „ambient“? Sound art at first turns to the issues of the context. It explores how sound is determined by the space, origin, or duration in a particular situation. It is less concerned with archiving.

The so-called ambient music does not tend to be a part of the music art history. Even if it is now and overused and emptied term, ambient played role in loosening firm categories of music, in moving music toward synesthetic levels of art. It also participated in synthesizing thinking about the relations among sound, space, corporality, landscape, environment, and ideology.

The history of the ambient tends to be connected with the name of the interdisciplinary artist and producer Brian Eno. In 1970s, Eno’s label Obscure Records released several albums that are considered to be classical examples of „different music“ that leaves the listener space to contemplate, surrounding the listener but stays in the background without being soulless and manipulative like the music sound wallpapers that are produced for shopping centers, doctor’s waiting rooms or the New Age movement centers. Albums Music for Airports (1978) or On Land (1982) are characterized by  moderation, thinness of both the tembre and the melody, limited spectrum of frequency. The style of lazy „spacecreating“ composition is not Eno’s invention. Indeed, his label‘s first title in 1975 was a 30-minute composition by Gavin Bryars titled Sinking of the Titanic. Bryars wrote it in 1969 when he was surrounded by the emerging radical British improvisational scene. His colleagues from the AMM group were John Tilbury, Derek Bailey, Tony Oxley, and in particular Cornelius Cardew who had a formative impact on the entire progressive part of the music scene at that time.

Sinking of the Titanic is protoambient music as much as compositions for canteens by Erik Satie, Imaginary Landscape no. 4 by John Cage or „dream music“ by La Monte Young and Tony Conrad. The composition was inspired by the testimony of a telegraphist who survived the wreck of the Titanic: during the unstoppable destruction of the seemingly unsinkable ship, the salon orchestra was said to perform the moving melody of the Episcopalian autumn hymn. Bryars’s composition is an imaginative sound scape, painting a picture of the matter of a gigantic fuselage of the ship sinking into the depths of the ocean accompanied by long echoes of the salon orchestra and fragments of voices.

Another crucial moment for establishing the style of the first decade of ambient music between pop and classical music were the concepts of the generative art by Roy Ascott, an influential artist who Eno trained with at the end of the 1960s. Eno refers to his teacher in a proclamation that it is „important to think about a work of art not as an object but as a tool – a carrier of experience. Eno worked out a cybernetic variant of ambient for airport halls and in the instances where he utilized synthesizer with the SSEYO Koan software. It algorithmically generated endless modifications of musical parameters inputed into the program by the author. In 1996 Eno and Koan took part in the legendary Berlin exhibition Sonambiente that introduced the sphere of the sound art to a broader audience and simultaneously marked a decisive step toward liberating art from limitations and norms of music and artistic operations.

The curators of the exhibition, Mathias Osterwald, Georg Weckwerth and Christian Kneisel placed the majority of the installations, concerts, and performances inside the then still abandoned or half empty buildings in East Berlin and managed to create a unique atmosphere. About a hundred artists from all over the world were invited, many of whom had experimented with connecting visual arts, sculpture, sound, architecture, and public space since the 1960s. At least two pioneers of sound art were missing from the list of participants: the composer Maryanne Amacher and soundartist Bill Fontana who in 1984 created a magnanimous installation as part of the „acoustic sculpture“ series. He often made use of dislocation, relocation, and sound transfer from one place to another through telecommunication networks. He titled a project for the Anhalt train station Distant Trains. Bombed out ruins of the former station complex near the Berlin wall remind of an epoch of one of the liveliest communication hubs in Germany. Fontana attempted to sound connect the place with the station in Cologne where he placed several microphones and live broadcasted the sound scape trough a phone line to Berlin where he amplified it. The listeners were walking in a real stage design evoking the present but aurally explored the memory of the place, the revocation of the set of the past.

Unlike sight, sound is deeply connected to the emotional layers of the personality and the connection of the visual and aural perception creates a phantomic, dreamy atmosphere.  In the evening, especially, when the wasteland in the middle of the divided metropolis immerses in the shade and the train noise and voices of the passengers from a station hundreds of kilometers away mix with a „real“ space of the bombed out strip in the middle of the divided metropolis, including the voices of birds and whirring of helicopters patrolling over the border of two lands.

The second line that can be traced in the genealogy of the sound intervention is in contrast to the immersive and contemplative approach of Brian Eno, Maryanne Amacher, Bill Fontan, Maxe Neuhaus, Petera Ablinger and others. „Wild stream“ is based in a targeted conceptual sound penetration into a social context and situation of a place. Sometimes it concerns a liberating sound celebration for a great number of actors, sometimes a subversive attack on stereotypes and breaking of conventions. Let’s mention two of the many possible forms.

The first is introduced in the work of the Spanish musician and educator, Llorenç Barber who has for several decades organized mass city performances involving as many agents and the entire city transforms into a sound theatre event. In cooperation with volunteers, associations and agencies, Barber prepares and presents the movement of sound parades attended by hundreds, sometimes thousands of musicians. It is not about flux performance or planned street concerts of the Urban Sax collective or a ride of booming techno sound systems but about anarchist acoustic events – percussion or wind instruments of individual ensembles play their own parts, sometimes from the score, more often improvising. Barber’s other long-term project are improvised concerts for church bells whose sound reflects from the building walls and resonates in a radius of many kilometers.

A somewhat extreme example of artistic intervention into the acoustic of public space are experiments with low frequencies that surpass the range of the human aural apparatus. These gained attention at several symposiums and exhibitions titled Tuned City or the Sonic Acts festivals. The terms such as psychoacoustics, soundscape architecture, or soundscape ecology have broadened the registry of thinking about the sound art, moving its practice and theory from the context of artistic operation of the exhibition spaces and clubs toward the public space and research laboratories.

Marc Bain is a sound artist and researcher from Seattle who has been since the 1990s using a generator of low frequencies, known as subbasses, as a tool for a dialogue with architecture. Every building construction has its specific material structure and tectonic characteristics. When we generate sound waves, we inevitably gain resonance and a matter, including the human body, begins to tactilely and acoustically tremble. Using an adequate intensity at the source, it is possible to kill or paralyze a person or demolish a building. We know this from the tale of Jericho whose walls collapsed at the sound of the trumpet. Another example of the sonification of wavelengths ordinarily inaudible to humans is the undergoing research project of Raviv Ganchrow Long Wave Synthesis. Ganchrow works with wave lengths between 4 a 30 Hz, and since it is about an experience of geological, meteorologic, and atmospheric occurrences that constantly surround us and most likely also influence us, a brand new territory that was previously inaccessible to human sight and hearing, opens up.

The author is an educator, theorist of art, and curator working in the FAMU Center for audiovisual studies.